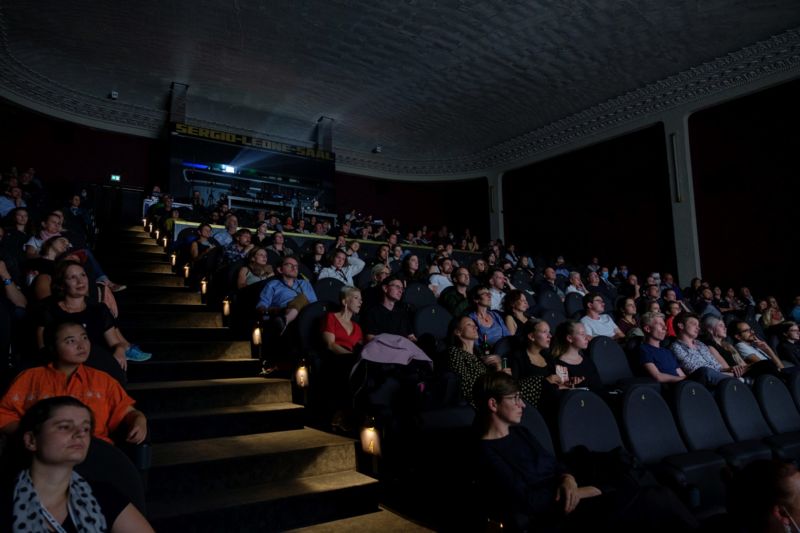 Discover the highlights of the second two days of FFDD21.

Thu, 9:30 pm Film Nights on the Elbe Bank: Central German Film Night
For the 10th time, regional filmmakers venture onto the particularly large stage at the Film Nights on the banks of the Elbe. During one long night they will present their latest works, make the audience laugh and move them to tears of joy. Afterwards, the audience will decide who will take home the audience prize of 2,000 euros. It will be exciting!

Thu, 6pm SLUB: Anton Ginzburg - Displacements
The New Yorker Anton Ginzburg is an artist and filmmaker. In his films, sculptures and paintings, historical questions and poetic reflections intertwine. At the 33rd FILMFEST DRESDEN, Ginzburg will present a selection of his films dedicated to geographical and historical transformations.

Thu, 8pm Thalia: Focus UK 2
Privatisation and cutbacks led the British social and health care system into crisis many years ago. The pandemic brought it to the brink of collapse. The programme that the Glasgow Short Film Festival is contributing to this year's Discourse Europe is an activist programme. It is a political indictment and a statement of solidarity for care workers. The social relevance of their work is examined from different angles, while at the same time shedding a whole new light on the political and social realities in the UK in the post-Brexit period.

Fri, 5pm Lingnerschloss: Animated - Homage to Sieglinde Hamacher
Sieglinde Hamacher was a virtuoso and experimental animation artist. During her creative years at the DEFA animated film studio, she created wonderful, philosophical film parables that regularly caused displeasure among the GDR authorities. Sieglinde Hamacher passed away in December 2020 at the age of 84. The FILMFEST DRESDEN bids farewell to a good friend and companion with a very personal tribute.

Fri, 6pm Club Kwang Lee: Discussion: Curating as a political act.
Tip: This event will also be broadcast live on our Facebook channel or website!
What impact do short film festivals have in an activist context? What is the relationship between aesthetics and politics in curation? Together with curators and representatives of short film festivals distinguished by their political commitment, we will look at the relationship between festival operations and activism as well as the conditions under which curating a short film programme is understood as a political act. In English

Fri, 20:30 Kunsthaus Raskolnikow: Exhibition opening "Non Konform".
The painters Klaus Hähner-Springmühl and Erich W. Hartzsch were important representatives of an independent non-conformist artistic scene in Karl- Marx-Stadt, now Chemnitz. The Super 8 film MENSCHEN DIESER STADT (People of this City), made in 1989, bears witness to this. At the opening of the exhibition, cine films by E. W. Hartzsch will be shown, providing insights into his creative methods. The screening will be framed by a discussion with the artist and film historian Dr. Claus Löser. In German