Prize-Winners of the 29th FILMFEST DRESDEN 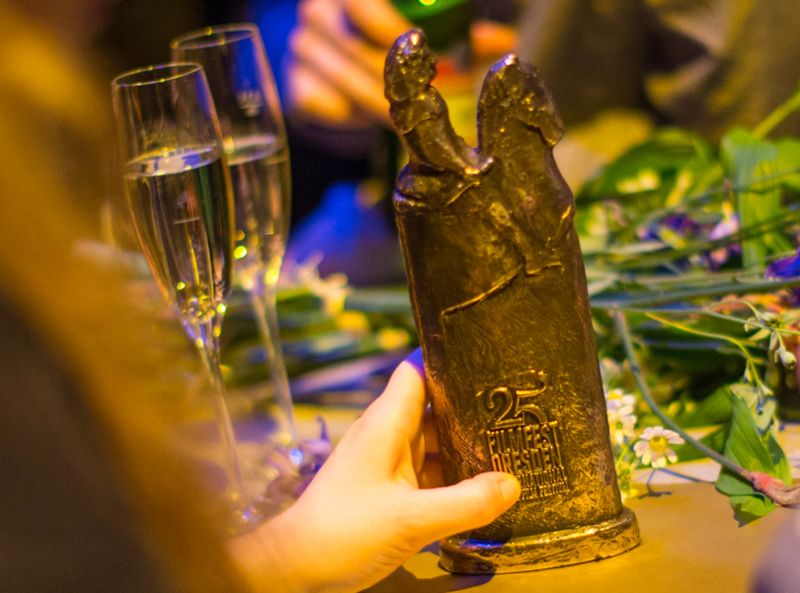 Dresden, 08.04.2017 – Amid much excitement, the Awards Ceremony for the 29th Filmfest Dresden was held this evening. With the happy winners of this year’s festival present in the Kleines Haus des Staatsschauspiel Dresden venue to receive their prizes for the best short films. A total of nine Golden Horsemen and four special prizes were awarded by the 16 members of the juries. The Polish director Renata Gąsiorowska scooped up several awards with her courageous and original animated film "Cipka". 63 animated and short fiction films were screened in the two competition sections this year. The winners were delighted to take home prize-money totalling € 66,000.

And here are the Prize-Winners of the 29th FILMFEST DRESDEN 2017.  All winners including the argumentation of the juries and honorable mentions are listed below. Film stills and footage of the winners:

argumentation: Social taboos should be discussed and confronted with a laugh. The jury had a lot of fun watching this peaceful connection between a woman and her body. For its original graphic style and its fluid animation technique.

argumentation: The jury was struck by the generous and chaotic power of a total work of art; or what we like to call "expanded cinema". It is made by a fearless artist who has no time to waste on labels and other conventions. He has created an anarchic love poem in which he looks at all sides and elements of a complex society.

argumentation: Unique images and powerful metaphors permit the audience to immerse themselves in the extraordinary situation of the protagonist. A key event leads to some grave changes in his relationship with his surroundings. This situation is filmically adapted through the atmospheric composition of innovative 3D animations and real footage.

argumentation: A colourful, expressive world of animation encounters a sound track from a unique everyday life. The combination of animation and documentary reportage develops into a form full of expression, which is both close and faraway to us at one and the same time. And equally moving.

argumentation: This is the story of separation as a new beginning. A film about the desire to get away and the duty to remain. With the camera seeking answers just like the protagonists. Tender and haunting, existential in both large and small. It is a profound look into the future of a generation. A moving film full of meaning without being intrusive.

argumentation: With its gloomy and tense atmosphere, the film draws us into a world in which everyday actions have become and remain suspicious. Thanks to its topicality and the danger it engenders, it seems as though reality and fiction have become indistinguishable. A conflict arises among the characters between living freedom and defending freedom. Marked by tension, mistrust and scepticism, the film radiates an intensity for the audience that captures them and creates an unforgettable experience.

argumentation: A special moment in the life of a young man. Which he imagined would be different. And he overreacts in his helplessness. The director sensitively reveals the fragility of the male identity during the process of maturing, and casually casts a glance at a specific social milieu. A film authentic in the moment. A film that stays in mind.

"zu zahm!" from Rebecca Blöcher
argumentation: Trapped in their roles. With expectations and stereotypes newly shuffled and exposed. The film leaves space for discovery.

argumentation: The impressionistic images in the film are complemented with a completely unique tonal language. With aural worlds created in a constant interplay doing so, that add a threatening dimension to the exuberant filmic canvas. The music plays a fundamental role, comparable to a protagonist, reaching into the story and advancing it structurally. Working on the utmost level and with extraordinary ingenuity, the composer and the sound designer of this film manage to build bridges between the various plot levels through the sound.

argumentation: This creative and clever animated film, which focuses on first sexual desires in a courageous and nimble way, sweeps us away on a surprising journey of discovery to the deepest moments of intimacy. The confronting of one’s own gender here is characterised by so much humour and charm, that the film becomes irresistible. We congratulate the director and are looking forward to more creative pieces by him.

"No one misses me!" from Erik Lemke

argumentation: For its imaginative and original story, elegant style and careful pacing.

"Empire of Evil" from Harald Hund

argumentation: The mockumentary "Empire of Evil" deals with the subject of one-sided Western reporting in a very authentic and humorous manner. With us asking ourselves at times what constitutes the truth. The everyday film footage is skilfully transformed with creative image editing and absurd ideas about the "threat to the West". In this way, an entertaining, media-critical parody has resulted about our opinion of the Middle East.

argumentation: The timing in this story is excellent in terms of both the moving images and the music. Skilfully linked with gentle humour, this thoughtful film was worthy of a special mention from us. It is borne by the various equivocal sound levels, which never slip into the obscene. In this way, Volodymyr Antonic, Ewa Bogusz and Wiesław Nowak have provided a humorous and uninhibited sound track.

Painting with history in a room filled with people with funny names 3 (17.0 KiB)