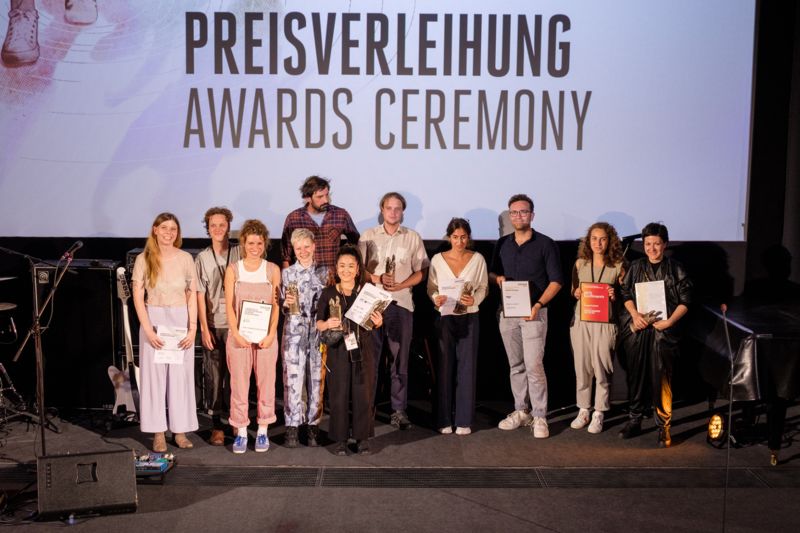 After six successful cinematic days, the 33 Filmfest Dresden ended last Sunday on a positive note. At the official awards ceremony on Saturday evening in the Filmtheater Schauburg festival cinema, nine Golden Horsemen and seven special prizes worth a total of €70,500 were awarded. This year, Filmfest Dresden attracted 12,400 festival visitors, including audiences of 10,400 at the film screenings and events in the various venues in Dresden. An additional 2,000 viewers watched the digital transmissions of the awards ceremony, as well as the panel discussions and talks, on the festival website and on Facebook. The 34 Filmfest Dresden is planned to be held in its traditional time slot next spring from 5 to 10 April 2022.

"We were very fortunate to be able to hold our festival live on location here in Dresden this year, and we were overwhelmed by the positive response to everything," Festival Director Sylke Gottlebe said. "Although there was a slight downturn in the visitor numbers, due presumably to the adverse weather conditions at some of the open-air screenings on Neumarkt square, for that we were delighted to see the audiences fill the cinemas at numerus screenings, such as the Kids and Youth programme and our Competition sections."

"After such a long dry spell, culturally and socially speaking, all the wonderful moments we were able to enjoy during the festival were simply indescribable, especially those beyond the cinemas," Festival Director Anne Gaschütz added. "For us, the encounters and get togethers between the filmmakers, for instance, some of whom saw each other for the first time ever here in Dresden, was clear confirmation that we made the right decision postponing the festival to the summer and holding it as a live event."

The most successful events at the 33 Filmfest Dresden included various programmes screened open air at the Film Nights at the Banks of the Elbe, such as the Short Film Night, as well as the 10th Regional Film Night and the Kids Special: Paint Along, Repaint, Paint Better. Likewise, high audience numbers were recorded at the "Focus Québec", "Discourse Europe: Focus United Kingdom" and the "Move to Change: Focus Activism" special programmes. As in the previous years, the ever-popular "Seriously! WTF?" programme in the Thalia cinema was a complete sell-out yet again. High guest numbers were also recorded at the "Non-Conform" exhibition opening in Galerie Raskolnikow and at the "Regional Focus: Here and There" screenings in the Clubkino im Lingnerschloss cinema. The Kids and Youth programme was a great success yet again this year, with audience favourites chosen for the first time ever: In the Kids 1 programme, these were MISHOU from Milen Vitanov and TOBI AND THE TURBOBUS from Verena Fels. In the Kids 2 programme, the favourites here were JÁMA (THE PIT) from Markéta Kubátová Smolíková and APPLE TREE MAN from Alla Vartanyan. In the Kids 3 programme, MIGRANTS from Hugo Caby, Antoine Dupriez, Lucas Lermytte and Zoé Devise was selected as the audience favourite. And in the Youth 1 programme, SEE YOU, SIR from Yayu Lin proved to be the most popular film with the audience.