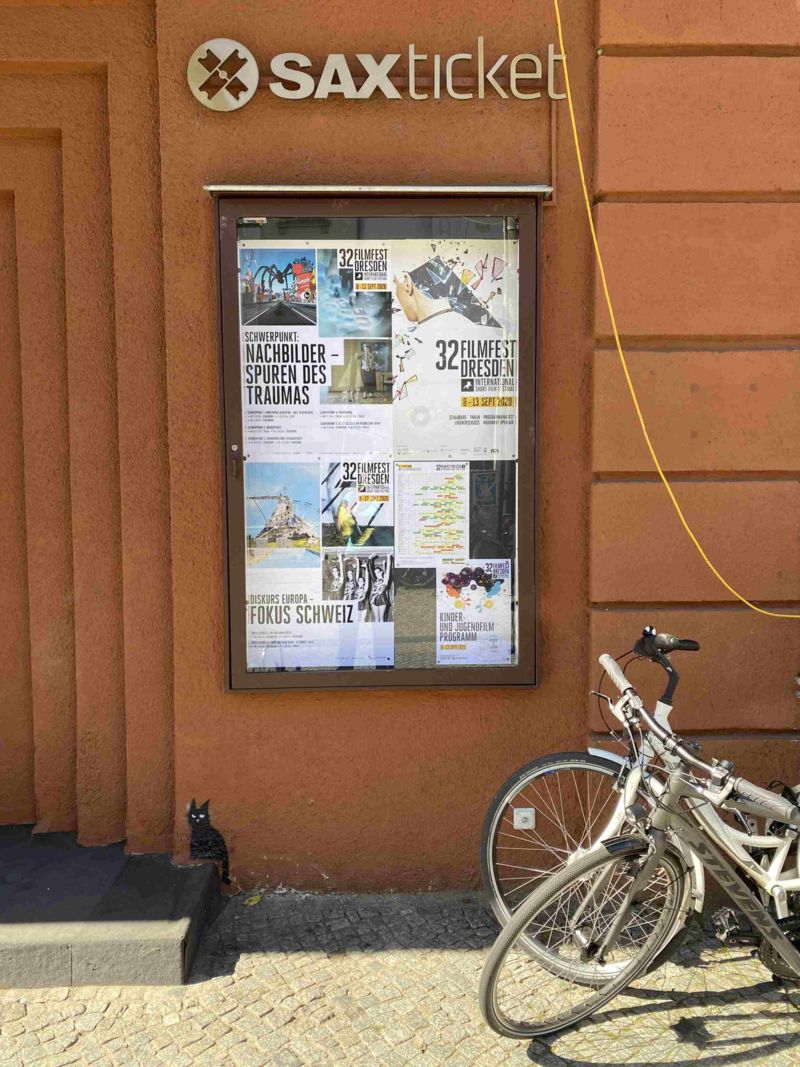 Almost four and a half months later than planned, the 32nd Filmfest Dresden is starting this evening in the Schauburg festival cinema. From 8 to 13 September a highly diverse programme consisting of 338 international short films, rarely screened pearls from the archives, as well as masterclasses, workshops, panel discussions and exhibitions is being presented. Festival Directors Sylke Gottlebe and Anne Gaschütz together with their team are welcoming about 260 industry professionals and filmmakers, including the Israeli video artist and film director Omer Fast, to Dresden. With 17 entertaining programmes, the highly popular Short Film Open-Air event is enticing the audiences to spend some time on Dresden’s Neumarkt square, and that with free admittance.

At the official opening starting at 19:00 in the Schauburg Dresden festival cinema, Sebastian Hecht, Head of the Culture and Tourism Business Area in the Saxony State Ministry for Science, Culture and Tourism, Culture Mayor Annekatrin Klepsch, as well as Sylke Gottlebe and Anne Gaschütz are welcoming the invited guests and giving some insights into the upcoming festival. As a filmic taste of what is to come, among others the social-media critical film ZOMBIES (International Competition) by the Congolese-Belgian artist Baloji is being screened, as well as, from the special programme, the French animation MY GENERATION from Ludovic Houplain (Focus: Afterimages –Traces of Trauma 2), an apocalyptic and hypnotic road movie about the interplay of digital fluxes. As in previous years, the presenter Jenni Zylka is hosting the official opening.

Parallel to the official opening, the cost-free Short Film Open-Air on Dresden’s Neumarkt Square is also starting. This highly popular event is already being held by Filmfest Dresden for the sixth time during the festival week. In sixteen thematic blocks, over 90 productions from more than 30 countries are recounting heartrending and humorous stories, tackling urgent issues of our time, providing critical information and immersing the audiences in sublime worlds. The Short Film Open-Air event has been made possible thanks to the  State Capital of Dresden, the technical partner pms Professional Media Service GmbH & Co. KG and the TV broadcaster Mitteldeutscher Rundfunk (MDR). There are short films for families on Saturday and Sunday from 14:00 to 17:00 at the three Family Shorts programmes.

Yet again this year, the audiences can look forward to various film guests from the competitions and the special programmes. In honour of the Israeli video artist and filmmaker Omer Fast, Filmfest Dresden is holding a tribute programme (Omer Fast – Remainder). On 12 September, the artist, who lives in Berlin and whose work has been seen among others at the Venice Biennale and the Documenta in Kassel, in addition to international film festivals, is presenting his works CONTINUITY and 5000 FEET IS THE BEST (20:00, Schauburg; rescreening on 13.09, 19:00). Prior to this, he is participating (from 13:30, Schauburg) in the panel discussion REPRESENTATIONS OF TRAUMA, that is also being broadcast live on the festival website.

From the National Competition, the director Olaf Held is coming to Dresden to present the world premiere of his short HAMMERTHAL THREE (National Competition 1). In the third part of his Hammerthal series, all kinds of conflicts arise between his protagonists to do with drug smuggling, alimony and entries in the land registry. A surreal tale of loneliness, jealousy and love is being recounted in the animated film PORTRAIT OF SUZANNE (National Competition 2). The director Izabela Plucińska, who is coming to Dresden together with the animator Małgorzata Borowiec, is also giving the "how modelling clay comes to life" workshop in cooperation with the Fantasia Dresden animation school. The director Hannah Weissenborn, who was already represented in 2019 with AM CU CE in the National Competition, is making a welcome return this year. She is bringing her new film PLUME to the festival, together with its leading actress and actor Lorette Sauvet and Clément Delpérié.

Further guests from the special programme include the Dresden artist Christine Schlegel, who is represented with films in the FEMALE DIRECTORS IN EAST GERMANY (GDR) retrospective, as well as with works in the PHASES exhibition. She is also holding a masterclass at the festival. From the FOCUS: AFTERIMAGES – TRACES OF TRAUMA programme, the director Jelena Ilić is personally presenting her film EUPHRAT. In the experiments programme, the director Scott Caloncio is explaining in EVERYTHING YOU WANTED TO KNOW ABOUT SUDDEN BIRTH* (*BUT WERE AFRAID TO ASK) what connects the police in Berkeley, the Nazi invasion of the Netherlands, an Oscar winner and Mr. Spock.

We are happy to send a list with all of the film guests and their attendance times at  Filmfest Dresden on request to filmfestdresden@noisefilmpr.com