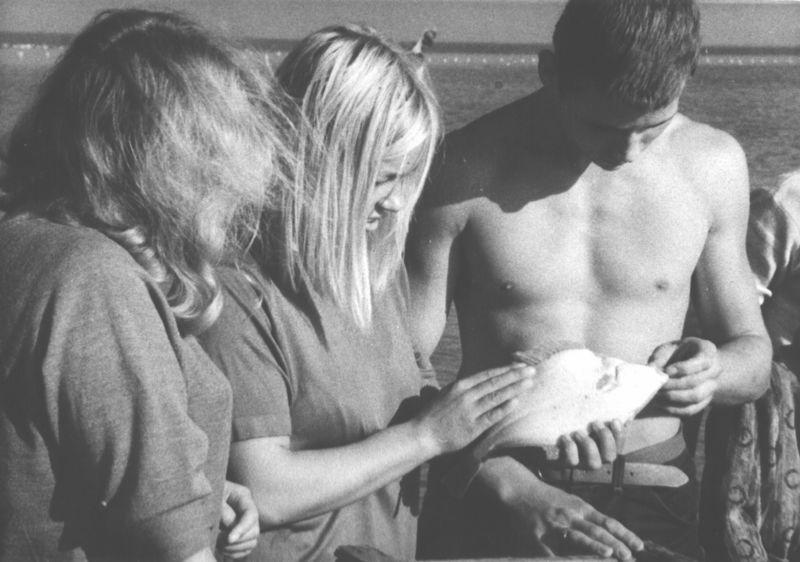 Dresden, 10.03.2016 – For the 85th birthday of the filmmaker and painter Jürgen Böttcher alias Strawalde, FILMFEST DRESDEN is devoting one of its three special festival sections this year to him. In two tribute programmes, eight of his most important short films are being screened which document his artistic oeuvre over three decades. The programme premiere is being held in cooperation with the Staatliche Kunstsammlungen Dresden, Dresden’s state art collections, and the DEFA Foundation on Thursday 14 April 2016 at 19:00 in the atrium of the Albertinum. The film screening is followed by a moderated discussion with Jürgen Böttcher. Free admission to the evening event.

In addition, the Albertinum is dedicating a small temporary exhibition to the artist and filmmaker Jürgen Böttcher alias Strawalde together with the protagonists in his documentary "Three of Many", commencing on 22 March. Entitled "Five of Many: Peter Graf, Peter Herrmann, Peter Makolies, A. R. Penck and Strawalde – Young German Art 50 Years Ago", the exhibition includes paintings and sculptures from his artistic companions in addition to Jürgen Böttcher’s own works. All those attending the film programme premiere can also have an exclusive view of the exhibition free-of-charge from 18:00 to 19:00 on 14 April.
"We’ve already been planning to present films from Jürgen Böttcher together with his paintings here in the Albertinum for a long time," said Hilke Wagner, Director of the Albertinum in the Staatliche Kunstsammlungen Dresden. "And now on the occasion of his 85th birthday, the films are even available in digital versions for the first time ever. So we were delighted to take up the initiative from FILMFEST DRESDEN and screen four documentaries here in our building. And we’re pleased to say that it has also proven possible to dedicate a temporary exhibition, intended to complement the film screenings, to the important generation of artists who moved in the same circles as Jürgen Böttcher alias Strawalde."

The tribute programme is being supported by the DEFA Foundation which, together with the Munich-based "edition filmmuseum", is also releasing three lavishly designed double DVDs on the artist’s oeuvre in the early summer.

Furthermore, his postcard-based transformative series are one of the topics at the symposium on photo animation being held on Thursday 14 April 2016. At the event, the expert Thomas Tode will speak to the audience consisting of specialists and those interested in the arts about, "I have seen the future. On the painted-over postcard films from Jürgen Böttcher". Accompanying this, his film "Venus after Giorgione" (GDR 1981) is being screened in the "Assemblage" photo animation festival film programme.
"Jürgen Böttcher is counted among the most important filmmakers from the DEFA era, with his films still trailblazing to the present day. And FILMFEST DRESDEN has screened his work repeatedly in the most varied of contexts since the early days of the festival," said Alexandra Schmidt, one of the festival directors at FILMFEST DRESDEN. "So we’re delighted to be able to devote a complete special festival section to Jürgen Böttcher this year and pay tribute not only to his work as a director, but also to the important role he has played as an artist."

Artist with Rare Double Talent
Jürgen Böttcher, who as a painter calls himself Strawalde after the place of his childhood and youth, was a ground-breaking filmmaker. As a director, he sought out the unique in the everyday. In his films, Böttcher looked for the beauty and the meaning of life in everyday gestures and signs. And he did so without patronising his viewers. As a painter, he has demonstrated his avowal to the avant-garde in many of his frequently large-format pictures and graphics with their ecstatic colour collages and abstract still lifes.
In addition to numerous national and international awards, Böttcher received the "Film Band in Gold" for his lifework in 1992. Shortly before that, his film "The Wall" (1991) won the "Felix", the European film prize for the best European documentary. In 2001, Böttcher was awarded the German Federal Cross of Merit. Likewise, his painting oeuvre has also been repeatedly honoured: The Darmstadt Art Prize (1992) was followed in 1997 by the Art Prize of the City of Dresden and by the Art Award of Sprengel Museum Hanover in 1998.

Tribute Programme in Honour of Jürgen Böttcher
FILMFEST DRESDEN is presenting eight films from the artist in two tribute programmes. Many of his films were banned as a result of the restrictive culture policy in East Germany (GDR) and remained inaccessible to audiences for decades.

Born 1931 as Jürgen Traugott Hans Böttcher and marked by the World War II era, he already displayed an interest in art at an early age. At 18, he enrolled as Strawalde in the Academy of Fine Arts Dresden and completed his studies in painting. In 1953, he worked for two years as a freelance artist and as a lecturer in evening classes for adults. In 1955, Böttcher started studying again at the Babelsberg Film School, which he successfully completed in 1960. He was a director at the DEFA Studio for Documentaries in Berlin, and his early cinematic works include "Three of Many" (1961) and "Barefoot and Hatless" (1964). The first film is the portrait of three artists friends of his who lead their own individual lives, have an interest in painting and thus do not correspond at all to the image of the worker in the GDR as desired by the communist party. And for that reason, the film was banned, as indeed was "45 Year Group" (1966), which was already suspended during the rough edit phase. In the GDR of the 1970s and ’80s, Jürgen Böttcher was the best known documentary director by far and was regarded as a secret model for many East German filmmakers. He won a prize at the Leipzig Documentary Film Festival among others for his industry documentation "Furnace Makers" (1962), as well as for "Stars" (1963), a film about the female workers in a light bulb factory. Until the end of the GDR, Böttcher’s career oscillated between bans and recognition. Since the reunification of Germany, he has devoted himself almost completely to painting, became a member of the Academy of Arts Berlin and has been represented in numerous exhibitions.
Jürgen Böttcher alias Strawalde lives and works in Berlin.