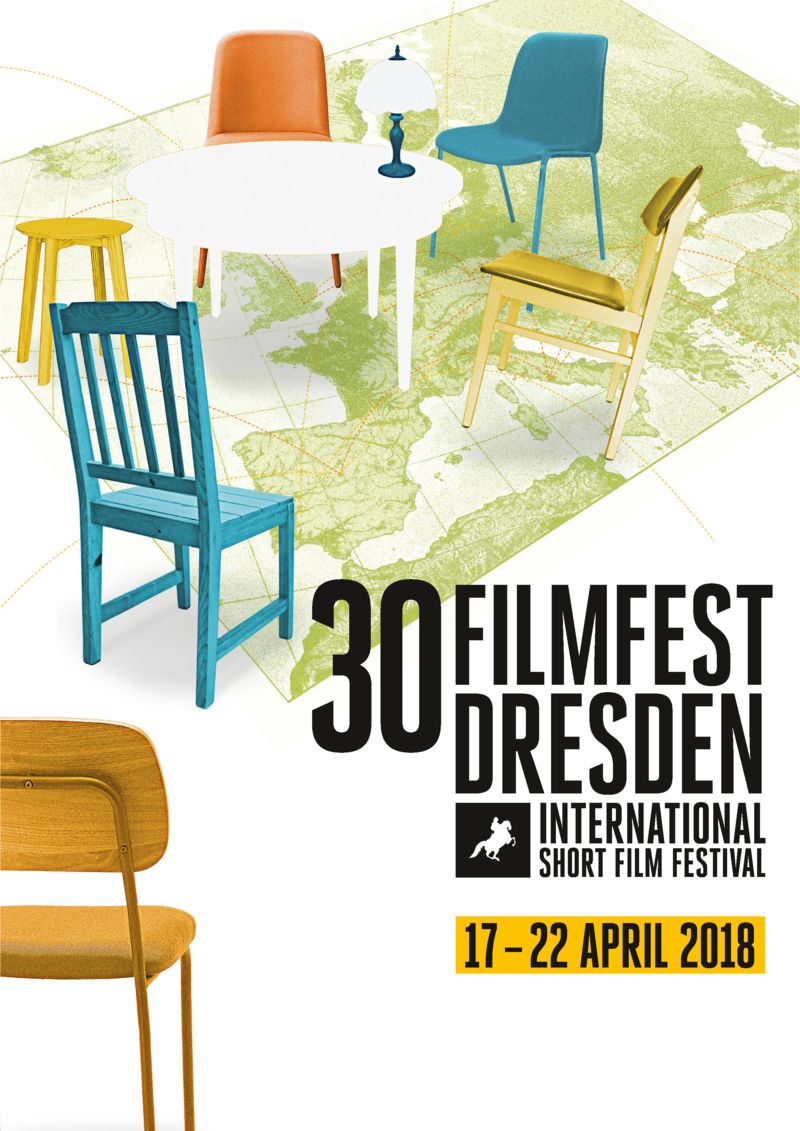 The curtains are about to be raised: Starting tomorrow, FILMFEST DRESDEN is celebrating its 30th anniversary over six festive days. Short film fans and media professionals from across the planet are ready to enjoy screenings, events and special shows all about short film, with several top-name filmmakers expected to attend. The official opening on 17 April is providing some filmic delights intended to give a taste of what is to come at this year's edition. With the Open Air short film screenings due to start parallel to this in Dresden's historic city centre.

This year the festival is being officially opened with welcoming addresses from the State Minister Uwe Gaul at the Saxony State Ministry for Science and the Arts, the Culture Mayor Annekatrin Klepsch of Dresden and the Festival Director Sylke Gottlebe. Other guests attending the festival and whose films are being screened in this year's International Competition include the Canadian filmmaker Abeille Tard (short fiction film "Le temps qu'il faut"), Rachel Gutgarts from Israel (animated film "A Love Letter to the One I Made Up"), the Iranian director Shiva Sadegh Asadi (animated film "Yal va Koopal") and the filmmaker Sarina Nihei (animated film "Rabbit's Blood", Japan/UK) as well as the French director Baptiste Martin-Bonnaire (short fiction film "Veuillez ne pas tenter d'ouvrir les portes").

Parallel to the official opening, the Open Air screenings are also beginning on Dresden's Neumarkt square. This is already the fourth time this open-air event is being held by FILMFEST DRESDEN during the festival week. The programme, being screened under the motto of "International Short Film Cinema", includes more than 50 short films from 30 countries that provide a cross-section of global film art today. The films recount controversial, emotional and humorous stories, and reveal monumental images of nature, as well as highlights of animation art. At the weekend, there are programme blocks especially for families with children.

New Prizes and Prize Sponsors in this Anniversary Year

The centrepiece of this year's anniversary edition is again the National and International Competition with a total of 69 nominated films being screened in them. Ten Golden Horseman awards and four special prizes worth €67,000 in total are waiting to be handed over to the lucky winners at the official Awards Ceremony on Saturday night. This year for the first time, a "Golden Horseman for GenderDiversity in Short Film" is also being awarded. Moreover, the festival has gained a new major prize sponsor for the Golden Horseman Animated Film award in the International Competition, the Heinrichsthaler Milchwerke dairy plant. With a €7,500 prize from the dairy waiting for the winner of the 30th anniversary edition.

As to be expected with the new award, the jury teams at FILMFEST DRESDEN have also grown in size: For the anniversary edition, there is a new Jury for Gender Diversity in Short Film, which includes the Dresden-based filmmaker and journalist Enrico Damme from the federal state office for work with men. The filmmaker Annika Pinske, whose films have been nominated repeatedly in the past for the National Competition section at FILMFEST DRESDEN ("Spielt keine Rolle", "Homework", "Taschengeld") is one of the jury members in the National Competition this year. In 2016, her second film "Homework" celebrated its premiere in Dresden and went on to win a Golden Lola at the German Short Film Awards. Likewise, the animation director and producer Špela Čadež, who has been repeatedly represented at FILMFEST DRESDEN, is a jury member in this year's International Competition. In 2014, she received a Golden Horseman Animated Film award for the best animation film in the National Competition ("Boles") and attended last year's FILMFEST DRESDEN with her film "Nighthawk", which has won 23 prizes and awards. And yet again in 2018, a Golden Horseman Sound Design is being awarded for the best cinematic soundscape. In this case, the Sound Design Jury consists among others of the freelance musician and performer Sven Janetzko, who is known from playing with a range of bands in Germany.

The Jury Members – an Overview:

Further information about the jury members can be found at: filmfest-dresden.de/de/festival/jurys

- Awards: Ten Golden Horsemen and four special prizes worth a total of €67,000

- Special focus on "Europe" with three programmes dedicated to it

- Masterclass with and tribute to the Hungarian director Ibolya Fekete

- Special programme for children and youth

- Exclusive new publication for the 30th anniversary: The print-edition festival chronical and online edition with film excerpts accessible at 30.filmfest-dresden.de

Info about the festival programme at: filmfest-dresden.de/en/programme