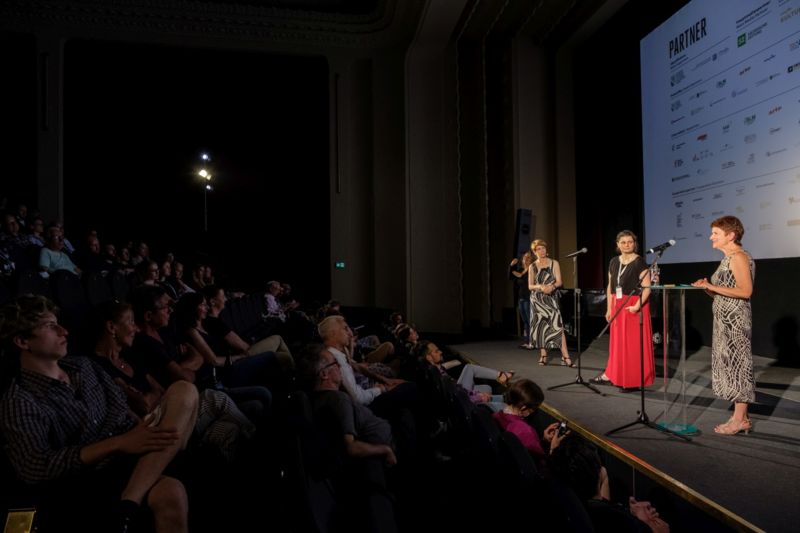 With its official opening this evening at 19.00, the 34th edition of Filmfest Dresden has started in the Filmtheater Schauburg festival cinema. From 5 to 10 April, a total of 355 short films from 68 countries are being screened in 13 venues in Dresden. Moreover, two special series on Ukraine have also been added at short notice to the festival programme. The filmic entertainment is being accompanied by a range of events in the etc. - events.trainings.connections festival section. The festival’s thematic focus this year is on gender diversity and justice, with a number of programme parts dedicated to it. Festival Directors Sylke Gottlebe and Anne Gaschütz, together with their Festival Team, are expecting more than 400 media professionals and filmmakers in Dresden over the festival week. The films selected for the three competition sections (National, International und Regional Competitions) are vying for nine “Golden Horsemen” trophies and seven special awards, which are endowed with prizemoney of €71,000. The winning films – to be chosen by eight juries and the festival audiences – will be announced at the awards ceremony on 9 April in the Filmtheater Schauburg festival cinema. Parallel to the main festival, the cost-free Open Air Programme is commencing on Dresden’s Neumarkt square at 14.00 today.

The 34 Filmfest Dresden in the Filmtheater Schauburg festival cinema is being launched with a video message from the German Minister of State for Culture and the Media, Claudia Roth. This is followed by welcoming remarks to the guests in attendance from Barbara Klepsch, Saxon State Minister of Culture and Tourism, Annekatrin Klepsch, Deputy Mayor for Culture and Tourism in the City of Dresden, as well as Festival Directors Sylke Gottlebe and Anne Gaschütz.

“Even during the two severe pandemic years, Filmfest Dresden continued to be a permanent fixture on Saxony’s cultural calendar. By doing so, it permitted the cineaste audiences here in Dresden to return to the cinemas and enjoy exciting, entertaining and even critical short films. For the filmmakers, the festival is again providing them with a platform for presenting their latest works and engaging in invigorating discussions and exchanges with the audiences,” Saxon State Minister of Culture and Tourism Barbara Klepsch commented in her speech at the opening event.

It has become a tradition at the opening gala for the Festival Team to provide insights into the upcoming festival week with some filmic treats. This year, these include the German animated film KLIMAX by Bea Höller from the National Competition, as well as an excerpt from the HUNGARIAN FOLK DANCE DOCUMENTATION: DANCES IN NEMESNÁDUDVAR AND PÁRI, which is being screened in the Regional Focus (Hi)Stories in Motion. Films from the Dance Archive Leipzig programme. As in previous years, the host for the event is Jenni Zylka.

As a reaction to the ongoing war in Ukraine, Filmfest Dresden has spontaneously added two further events to its programme: On Saturday 9 April at 15.00, the festival’s longstanding cooperation partner, Fantasia Dresden Animation School, is presenting the results of the ANIMA international workshop at the Open Air Programme on Dresden’s Neumarkt square. The animated films by children and youth from Poland, Russia, Germany and Ukraine were partly made after their having to flee from Ukraine.

Furthermore on Sunday 10 April at 20.00 in the Filmtheater Schauburg festival cinema, the short film programme UKRAINE. IN JOY AND SORROW is being screened. It has been curated by Olha Raiter, Festival Director of the Wiz-Art in Lviv international short film festival. Olha Raiter has currently found refuge in Bautzen. Six films from Ukraine are being shown that reflect life and everyday realities there before the war, including DEEP LOVE (2019) from Mykyta Lyskov (International Competition at the 2020 Filmfest Dresden), as well as IN JOY (2018) from Maryna Roshchyna. Olha Raiter will attend a film discussion in Dresden.

Both of the events are cost-free, with donations being collected at them for Ukrainian refugees.

Guests at the 34 Filmfest Dresden

Numerous guests are expected in Dresden to present their films or programme sections. These include the animation film artist Gil Alkabetz, whose new film BESEDER (GOOD AND BETTER) is running in the National Competition. Alkabetz was already represented with RUBICON at the festival’s first ever National Competition, which is celebrating its 25th anniversary this year. Brenda Lien is showing her piece FIRST WORK, THEN PLAY (National Competition) to the audience. Lien also created the festival trailer this year.

In the International Competition, the filmmaker and multimedia artist Ghyzlene Boukaila is presenting her film #31# (APPEL MASQUÉ). For the film discussions on their work IT IS NOT THE BRAZILIAN HOMOSEXUALS WHO ARE

PERVERSE BUT THE SITUATION IN WHICH THEY LIVE (International Competition 04), the directors Leandro Goddinho and Paulo Menezes are coming specially to Dresden. In this fictional documentary, Paulo Menezes plays at the side of Eduardo Mamede, the third director of the film.

From the Regional Competition, the audiences can look forward, among others, to Alison Kuhn and her new work FLUFFY TALES, as well as to Jan Soldat’s experimental documentary AT LEAST I’VE BEEN OUTSIDE.

For the FOKUS QUÉBEC special programme, the programme’s curator, the French-Canadian director and sculptures Caroline Monnet, is coming to the State Capital of Saxony and bringing the director Alisi Telengut, who is screening her animated work LA GROGNE in the programme.

Already for the eighth time now with its Open Air Programme in the heart of Dresden’s old city, Filmfest Dresden is providing a huge screen for short films. On the high-resolution and daylight-capable LED screen, from 5 to 10 April the viewers are being treated to a total of 29 programmes with highlights from the festival season and a best-of selection with international titles of all genres and styles. Yet again, the National Competition Selection Committee has diligently chosen one programme here. The works being screened include Betina Kuntzsch’s 30-minute documentary HEAD FIST FLAG (05.04. 15.00 & 09.04. 12.00), in which she casts a look at the Ernst Thälmann Memorial in Berlin. The films in the ever-popular programme CRITIC’S FINEST – LOVE AND OTHER TRIVIALITIES, which was compiled by Oliver Reinhard from the Sächsische Zeitung newspaper media partner (on 08.04. 16.00), all revolve around the subject of love. In six programmes, the short film candidates for the European Film Awards 2021 are being shown to the audiences. In addition, the four Family Shorts programmes are screening short films for young film fans and those older fans who have remained young at heart daily at 16.00, as well as on Friday, Saturday and Sunday at 15.00.