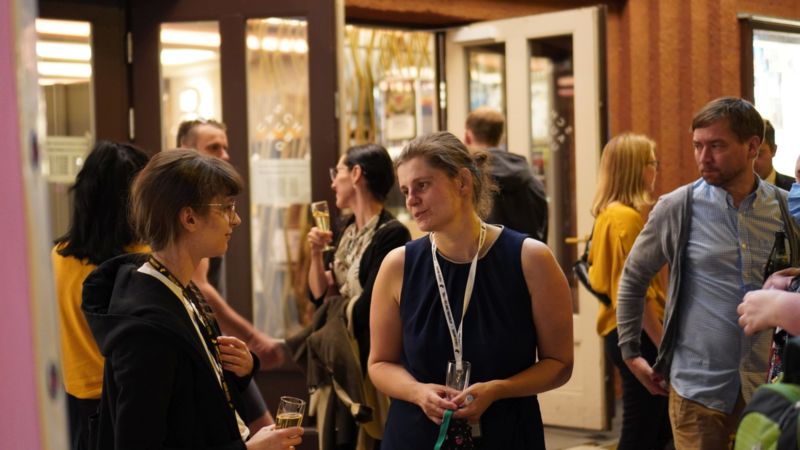 The 33 Filmfest Dresden, which again this year was postponed from April, is kicking off this evening at 19.00 with the festival’s official opening in the Filmtheater Schauburg festival cinema. 368 short films from 64 countries are being screened in the Dresden venues and at the open-air event from 8 to 13 July. One focal area of this year’s festival is on the subject of activism. The film screenings are being accompanied by an exciting events programme consisting of masterclasses, workshops, panel discussions and exhibitions. Festival Directors Sylke Gottlebe and Anne Gaschütz together with their team are welcoming the 370 industry professionals and filmmakers due to attend. With the entries in the National, International and Regional Competitions vying for the nine "Golden Horsemen" and seven special awards with prizemoney of €70,500. Eight independent juries and the audiences will get to decide on the winners. The free-entry Open Air short film screenings on Dresden’s Neumarkt square started in advance this year and continue until 14 July.

This evening in the Schauburg festival cinema, the 33 Filmfest Dresden is being opened by Sebastian Hecht, Head of the Culture and Tourism Business Area in the Saxon State Ministry of Science, Culture and Tourism, and by Dirk Hilbert, Mayor of the Dresden State Capital, as well as by Sylke Gottlebe and Anne Gaschütz.

The guests invited to the opening gala will enjoy a filmic taste of what is to come over the festival week with screening from various programmes. These include the Dutch animated film WHAT U WANT FAM from Aisha Madu in the MOVE TO CHANGE! FOCUS ACTIVISM special programme, as well as the Chinese-Spanish co-production I’M TOO BUSY (International Competition) from Carmen Aumedes Mier. The musical entertainment is being provided by saxophonist Denise Frey performing a live score to the GDR short film PUTTI (1952) from the "Regional Focus" special programme. As in previous years, the presenter Jenni Zylka is hosting the official opening.

Guests at the 33 Filmfest Dresden

370 guests are expected to attend the festival, including numerous filmmakers from the competition sections and special programmes, as well as participants in the workshops and events programme.

In the International Competition, Veneta Androva from Bulgaria is presenting her film AIVA (IC 3). Stefan Kruse Jørgensen from Denmark is returning to Dresden with his latest work A LACK OF CLARITY (IC 6). He was already represented in 2020 with THE MIGRATING IMAGE, screened in the "Focus: Afterimages – Traces of Trauma" programme.