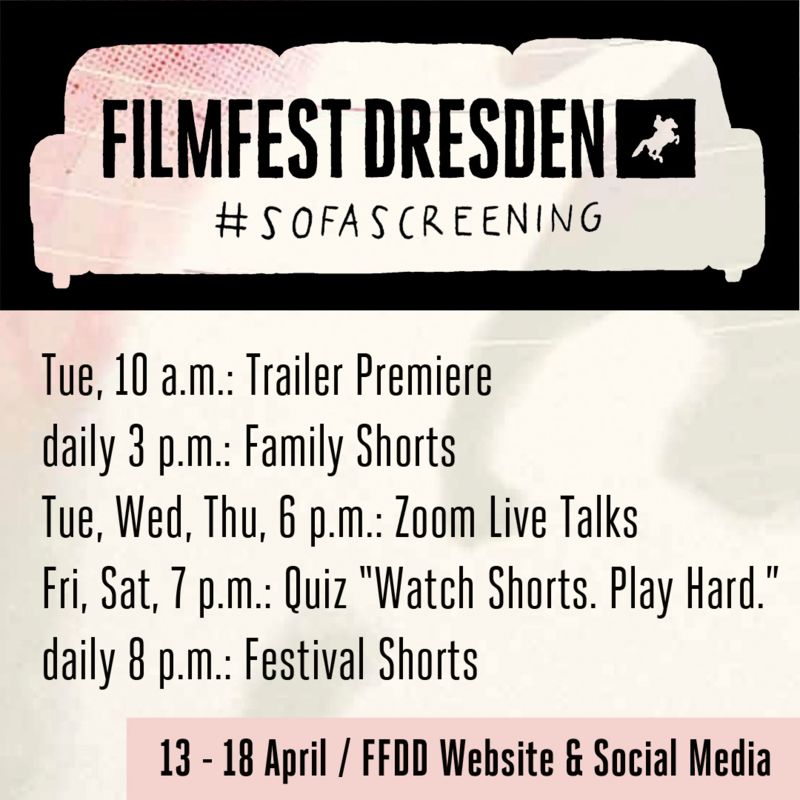 From 13 to 18 April we would have celebrated the 33 FILMFEST DRESDEN together with you. Like last year, we unfortunately have to postpone this and now hope to welcome you from 13 to 18 July. But once again we don't want the original festival week to pass by without short films and invite you again to the #FFDDathome #sofascreening on our social media channels as well as here on the website.

From Tuesday 13 April we have prepared a small "festival programme" with digital screenings of festival films as well as live talks with partners from this year's special programmes. In addition, we are presenting our short-film quiz "Watch Shorts! Play Hard" in cooperation with the Groove Station on Friday and Saturday, 16 and 17 April at 7 pm each.

At the daily film screenings, we'll always present a short film from the children's/youth section at 3pm, which the members of our FILMFEST DRESDEN Young Curators introduce and encourage you to consciously watch and reflect on the films. At 8pm we continue with a short film from this year's festival programme. In this, we will show both competition entries as well as films from our special programmes, such as the Focus on Activism or the Focus on Québec.

For our live English talks on Zoom, we would like to invite you to participate during the talks via comments. At 6pm each day, we will be talking to Veton Nurkollari (Artistic Director of DokuFest in Kosovo), Alexandre Dostie (Filmmaker and Curator Focus Québec FFDD21) and Aurora Rodonò (Diversity Manager at the Rautenstrauch-Joest-Museum and Curator Special Programme Activism FFDD21).

You can follow all this on our website as well as on our social media channels. We will publish details in good time so that you don't miss anything.

So, make yourself comfortable on your sofa - we'll take care of the films and guests!