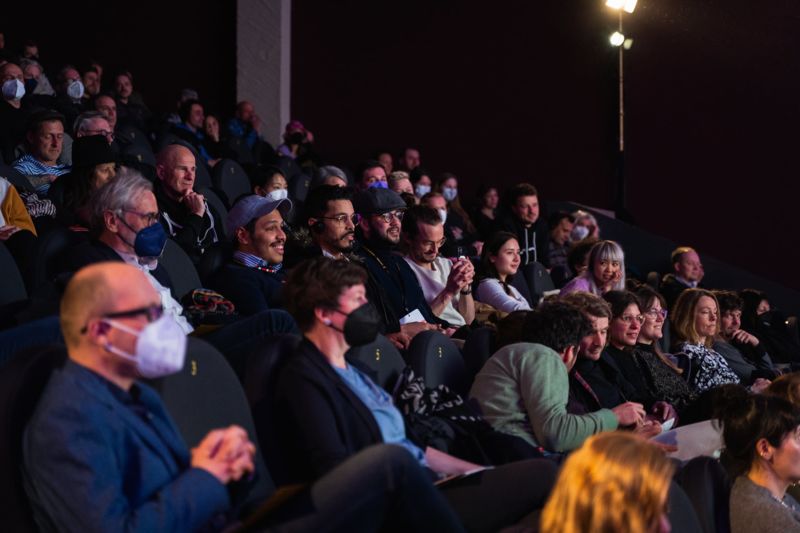 The 34 Filmfest Dresden came to a successful conclusion on Sunday night. With #backtocinema as its motto, between 5 and 10 April Filmfest Dresden attracted festival visitors numbering 12,900 to the 199 festival screenings and events held in 123 Dresden venues. Of these numbers, more than 7,700 people came to the festival cinemas. Although the corona measures were relaxed, minimal distancing rules continued to be maintained during the screenings. This did, however, permit about 80% more audience members in the cinemas compared to last year’s summer festival. The events in the etc. - events. trainings. connections. special programme, which were again all held on location this year compared to 2021, were attended by 1,350 people. At the official awards ceremony on Saturday evening in the Filmtheater Schauburg festival cinema, nine Golden Horsemen and seven special prizes worth €71,000 were awarded. The 35 Filmfest Dresden is being held from 18 to 23 April 2023.

“Returning Filmfest Dresden to its April slot really was a success on all levels,” said a pleased Festival Director Sylke Gottlebe. “For us, having so many visitors in the festival venues, as well as the moving moments during the exchanges and encounters between our guests, all really proved critical in being able to have a normal festival event this year.”

“The ongoing war in Ukraine had a deep effect on us and our guests over the complete festival,” Festival Director Anne Gaschütz added. “But for that, we able to show our solidarity by adding two special events at short notice to the festival programme, and we were delighted to be able to collect donations for aid organisations to use helping refugee children from Ukraine.”

Yet again, the most successful events at the 34 Filmfest Dresden proved to be the programmes in the International and National Competitions, as well as the film screenings in the Kids & Youth Programmes. In the special programmes, the film series in the MOVE YOUR BODY, SEE YOUR BODY, PROTECT YOUR BODY! and in the WHAT’S IN A MALE? from the FREEING THE GAZE – FOCUS GENDER DIVERSITY AND JUSTICE focal programme were highly popular with the audiences. Furthermore, the Focus Québec special programme, the SHORT TIGER NEXT GENERATION 2022 premieres and the two PANORAMA programmes, as well as the newly launched CINEMA DIGESTIF late-night events in the Thalia Kino cinema, were all well attended.